Show Notes:
– The first part of ‘Endless Slaughter’ was played and went straight into ‘Hot Dog’.
– The band jammed the intro of ‘Master Of Puppets’ by Metallica after the second chorus of ‘Hot Dog’ before continuing the song.
– Fred didn’t sing the last chorus of ‘Bring It Back’.
– This was the first time since 2013.11.26 Voronezh, Russia show that ‘The One’ has been played. Fred said it would be the only time they would play the song, but they played the song at all remaining shows of the tour.
– Before ‘Eat You Alive’, Fred went to to left stage side balcony, then went through the pit and performed the song from inside the crowd. After the song, he went to the right stage side balcony before he went back to the stage.
– Wes got a fan called Sascha on stage to play guitar on ‘My Way’.
– ‘Ready To Go’ was on the setlist after ‘Behind Blue Eyes’ (The Who cover) but not played during the show.
– Wes and John jammed the intros of ‘Sweet Child ‘O Mine’ by Guns ‘N’ Roses before he and John jammed the intro of ‘Holy Wars.. The Punishment Due’ by Megadeth. After that, someone in the audience passed through an acoustic guitar to Wes, he took it and played a couple notes, then handed it back and commented “terrible guitar, terrible”. Then the band played a short Nirvana medley, playing ‘Smells Like Teen Spirit’ and ‘Heart-Shaped Box’ (both Nirvana covers) until the first chorus before Wes started ‘Break Stuff’.
– Soundcheck included ‘Sour’, ‘Stuck’, ‘Walking Away’, ‘Bring It Back’, ‘The One’, ‘Ready To Go’ and unknown songs of Metallica and Guns ‘n Roses (Welcome To The Jungle?).

Other Notes:
– Fred played a DJ Set at Dom Pechati the night before. 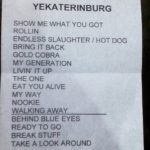 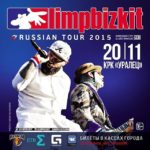