Show Notes:
– The band jammed the intro of ‘Master Of Puppets’ by Metallica after the second chorus of ‘Hot Dog’ before continuing the song.
– Wes and John jammed the bridge of ‘Master Of Puppets’ by Metallica and the intros of TBA and ‘Holy Wars.. The Punishment Due’ by Megadeth before ‘Gold Cobra’.
– Fred brought a girl on stage during the bridge of ‘Gold Cobra’ and let her stay on stage until the end of the song.
– The bridge of ‘Livin’ It Up’ was more extended than usual, with Sam playing a little bass solo before Fred continued the song.
– Fred went into the crowd at the last chorus of ‘The One’ and walked through the crowd after the song to perform ‘Eat You Alive’ on the left stage side of the pit. While he went there, Wes and John jammed (TBA Song) by (TBA Band). After the song, he walked through the crowd to get on the other side of the venue and greeted the people there, then went back on stage to perform ‘My Way’.
– Apparently, Fred did not want to play ‘Take A Look Around’. Wes started playing the song immediately after ‘Break Stuff’ ended, causing Fred to say “I was trying to skip that one, let’s do it”.

Other Notes:
– AFter the show, Fred played a DJ set at Mountain Crystal at the official afterparty. 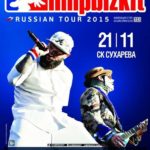 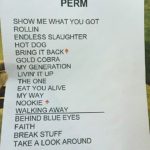