Show Notes:
– ‘Endless Slaughter’ has been dropped for this show.
– Wes and John jammed the bridge of ‘Master Of Puppets’ by Metallica before ‘Hot Dog’.
– The band jammed the intro of ‘Master Of Puppets’ by Metallica after the second chorus of ‘Hot Dog’ before continuing the song.
– During the bridge of ‘My Generation’, Fred saw someone put up a sign up saying it’s their birthday. Fred congratulates and then tells them to put away the sign because it’s blocking the view of the people behind them. After that he continued with the song.
– Wes stopped playing the intro of ‘Livin’ It Up’ after somebody on the his side of stage in the front row pointed something at him. He went to him, then told security to drag him away. When he jumped back on stage he continued playing one note before Fred came to him and asked him what happened. After Wes told him what happened, he pointed at the guy in the audience and gave security signs to kick him out and threw water off his bottle after him.
– Fred skipped the second part of the bridge of ‘Livin’ It Up’ until the last line.
– This was the first and only time ever that the band covered ‘This Love’ by Pantera.
– ‘Faith’ (George Michael cover) and ‘Boiler’ were not on the setlist but added during the show.
– Before ‘Eat You Alive’, Fred brought his wife Kseniya Durst on stage to let her announce that he is doing a DJ set in a bar after the show and that everyone is invited.
– The band got fans up on stage to let them play ‘Break Stuff’ on every instrument except turntables, entitling them “Russian Bizkit”. After that, the band played the song again. Therefore the encore break got cut.
– This show had a one time only special stage setup with four additional staircases. Therefore, the band’s crew decided to let fans, who are invited to watch the show from side-stage, watch the show behind the stage on top of the band. The reason why this special stage setup has happened is unknown.
– This was the longest show of the tour and the longest show since 2011, being almost 2 hours long.

Other Notes:
– This show was supposed to take place at Tatneft-Arena but has been moved to Basket-Hall. 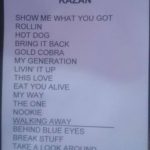