Show Notes:
– ‘Endless Slaughter’ was on the setlist but dropped during the show.
– Wes and John jammed the bridge of ‘Master Of Puppets’ by Metallica before ‘Hot Dog’.
– The band jammed the intro of ‘Master Of Puppets’ by Metallica after the second chorus of ‘Hot Dog’ before continuing the song.
– Before ‘Gold Cobra’, Wes and John played a short Covers Medley, starting with the intro of ‘Holy Wars.. The Punishment Due’ by Megeadeth, followed by the intro of ‘Wasted Years’ by Iron Maiden and finished jamming the bands’ instrumental version of ‘Wicked’ (Ice Cube cover).
– The crowd sat down for the bridge of ‘My Generation’.
– Fred took a flag a fan brought to the show during the bridge of ‘Livin’ It Up’ and pulled the fan on stage for the rest of the song.
– Fred went to the balcony on the right stage side after ‘The One’ and stayed there until the bridge of ‘Eat You Alive’. Then, he went to the back of the venue and contiuned walking towards the balcony on the left stage side until the end of the song. After that, he went back on stage.
– Fred invited a girl called ? to sing ‘Behind Blue Eyes’ (The Who cover) with him as duet. He also invited his wife Kseniya and her mother, who attended this show as well, to come on stage.
– The setlist had ‘Faith’ (George Michael cover) or ‘Boiler’ to be played as the second song of the encore, but the band decided to get a local on stage for a short beatbox session while he rapped the first verse of ‘Rollin’ (Air Raid Vehicle) and have ‘Faith’ (George Michael cover) played instead.

Other Notes:
– This show was originally announced to take place at A2 but has been upgraded to Sibur Arena after the show was sold out. 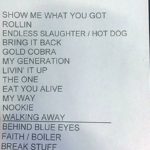 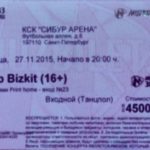