Show Notes:
– Fred had Kadaver (Wes’s guitar tech) serve him Vodka in a glass before ‘My Way’ and had him drink off the bottle before he told him to give Wes a shot which Kadaver passed to him.
– The band played a Nirvana Medley after ‘My Way’, playing ‘Heart-Shaped Box’ and ‘Smells Like Teen Spirit’ (both by Nirvana) until the first chorus.
– The encore break was cut due to time constraints. The band had a 10:30 pm curfew to fulfil, which is why they replaced ‘Boiler’, originally to be played after ‘Behind Blue Eyes’ (The Who cover), with ‘Faith’ (George Michael cover) too.

Other Notes:
– This was the first time that the band played in Kazakhstan.
– This show was originally announced to take place at Dvorets Sporta Baluan Sholak but has been downgraded to Event Arena due to low ticket sales. 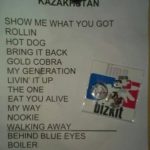