Show Notes:
– This was the only time that ‘Why Try’ was played in 2016.
– Part 1 of ‘Endless Slaughter’ has been played and went straight into ‘Hot Dog’.
– Franko started the ‘Walk’ by Pantera interlude but Wes stopped him and played the riff himself. John and Sam joined and they jammed the Intro and chorus.
– Fred dedicated ‘Killing In The Name’ (Rage Against The Machine cover) to Tim Commerford, bassist of Rage Against The Machine.
– ‘My Way’ was played twice at this show! First time was with a fan on guitar and Wes on vocals and the second time Wes on guitar and Fred on vocals.
– ‘Counterfeit’ has been played until the second chorus and went into ‘I’m Broke’.
– ‘Nookie’ was played until the second chorus and went straight into ‘Full Nelson’. Fred got Gabe on stage to get the crowd pumped in Spanish during the intro of ‘Full Nelson’.
– The band played a Nirvana Medley consisting of ‘Heart-Shaped Box’ and ‘Smells Like Teen Spirit’ until the first chorus.
– This was the longest show the band played since 2015.11.23 Kazan, Russia. 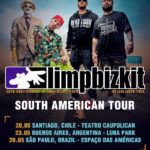