Other Notes:
– The festival sold out in advance. 35000 people were in attendance. 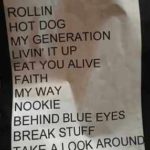