Show Notes:
– Fred got a fan up on stage for a song, but it remains unknown why and for which song.
– The band played a Nirvana Medley, consisting of ‘Heart-Shaped Box’ and ‘Smells Like Teen Spirit’ until the first chorus.

Other Notes:
– This was the second time that the band headlined Reload Festival. The festival was sold out and 10000 people were in attendance.
– Full setlist unknown. These songs came from reviews and videos. The band played a 75 minutes set. If you know the full setlist, please let us know! 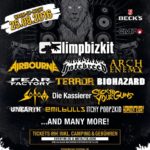