Source 6: Video – AUD (Panasonic HC-VX700) (Right Angle #2)
Taper: jederlacht
Time: 27 mins
Format: BluRay (1080p)
Comments: Incomplete. Tapers notes: “Previously this was meant to be a tripod shot but during Hot Dog some bitches totally obstructed our entire view so I took my camera and started filming with hands, later a lot of people were going thru our seats so we had to move several times which you can see on the recording. During “Gold Cobra” I totally got pissed off so I gave up on the filming and only partially did “Eat You Alive” and full “Nookie”.”

Show Notes:
– Fred sang the first lines of ‘Du Hast’ by Rammstein as introduction for ‘Faith’ (George Michael cover).
– The band played a Nirvana Medley after ‘My Way’, consisting of ‘Heart-Shaped Box’ and ‘Smells Like Teen Spirit’ until the first chorus.

Other Notes:
– Bullet For My Valentine were supposed to play before the band, but had to cancel three days before due to a Typhoon. Gojira played instead.
– Sold out show. 45000 people were in attendance. 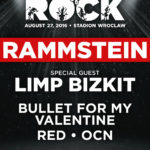 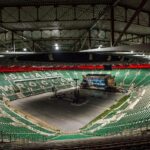