Show Notes:
– Crew member Gabe Karon sang ‘Mother’ by Danzig over a played sample with Wes playing guitar sometimes. He wore a wig during the performance.
– The band got fans up on stage to play a song, entitling the band “Limp Dick”. The fans decided to go with ‘Take A Look Around’, but it was aborted by Fred after the first chorus due to the guitar player messing up most of the song.
– ‘Faith’ (George Michael cover) was on the setlist after ‘My Way’ but dropped due to time constraints. Instead the band played the Nirvana medley consisting of ‘Heart-Shaped Box’ and ‘Smells Like Teen Spirit’ played until the first chorus!
– Wes invited two fans who attended every show of the tour to watch ‘Take A Look Around’ from the side of the stage, stating that they are his favorite fan couple.

Other Notes:
– KoRn invited the band to come out on stage along with Madball guitarrist Brian “Mitts” Daniels to do a photo after their set was done. Fred did a short clip for Instagram as he went on stage. 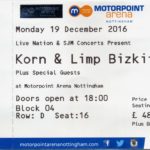 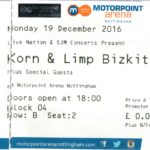 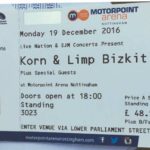 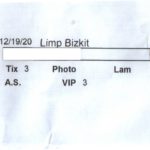 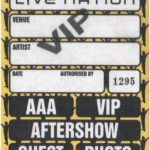 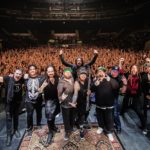