Show Notes:
– This was the first time since 2016.05.23 Buenos Aires show that ‘Why Try’ was played, but it was the first time since 2015.10.27 Yuzhno-Sakhalinsk that the song opened a show. This was also the only time in 2018 that the song was played live.
– The band played ‘Welcome To The Jungle’ by Guns ‘N’ Roses until the second chorus. This was the first time since 2015.11.12 Chelyabinsk, Russia that the song was played until the second chorus.
– Fred went into the soundboard area during the bridge of ‘Eat You Alive’.
– Fred let Tsuzumi talk Japanese to the crowd before ‘My Generation’.
– ‘I’m Broke’ was on the setlist to be played with Mayuko Okai, Tsuzumi’s sister and guitarist of the Okai Sisters, but dropped during the show. Instead, ‘Re-Arranged’ (until the bridge) into ‘Killing In The Name’ (Rage Against The Machine cover) were played.
– DJ Lethal was late with samples during the intro of ‘Re-Arranged’, most likely due to the song getting played spontaneously.
– Fred didn’t do vocals for the second part of the last chorus of ‘Boiler’ at this show.
– The band played ‘Smells Like Teen Spirit’ until the first chorus before Wes went into ‘Break Stuff’.

Other Notes:
– This was the first Japanese headline show since 2011.
– Thanks to Limp Bizkit Japan for the setlist picture and for confirming the final setlist! 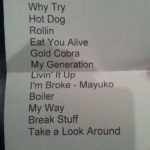 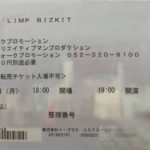 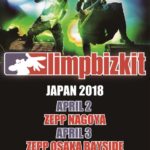 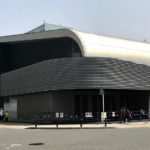 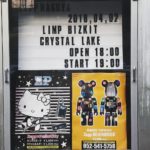