Show Notes:
– The band started the show by playing the intro of ‘Cowboys From Hell’ by Pantera in hommage to Vinnie Paul, who passed away the day before. After that, ‘Hot Dog’ was played.
– ‘Nookie’ was played until the beginning of the bridge and went into ‘Full Nelson’.
– ‘Thieves’ (Ministry cover) was not on the setlist but played before ‘My Generation’.
– The band played a short Covers Medley after ‘My Generation’, starting with the bridge of ‘Master Of Puppets’ by Metallica, followed by the intro of ‘Holy Wars… The Punishment Due’ before they played ‘Smells Like Teen Spirit’ (Nirvana cover) until the first chorus.
– At one point during the show Wes jammed the intros of ‘Counterfeit’ and ‘I’m Broke’, but it is unknown when he did.
– Wes crowdsurfed during the bridge of ‘Break Stuff’.

Other Notes:
– Hellfest sold out less than 48 hours after tickets went on sale. 60000 people were in attendance.
– Parts of the festival were webcasted online at ARTE Concert, but the bands’ performance was not included. 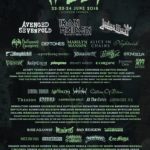