Show Notes:
– This was the first time since 2014.11.12 Seoul, South Korea that the band opened a show with ‘My Generation’.
– Wes went into the crowd and Fred near the front barricade during the bridge of ‘Break Stuff’.
– Before ‘Rollin’ (Air Raid Vehicle), DJ Lethal played a part of ‘Unholy Confessions’ by Avenged Sevenfold over the PA. Fred dedicated that to M. Shadows, vocalist of Avenged Sevenfold, along with sending get well wishes to him.
– ‘Thieves’ (Ministry cover) was not on the setlist, but played in it’s short version. Before that, ‘Seven Nation Army’ by The White Stripes, ‘Jump Around’ by House Of Pain and ‘Walk’ by Pantera were played over the PA, followed by a short ‘Cowboys From Hell’ by Pantera intro jam.
– ‘Nookie’ was played until the second chorus and followed by ‘Killing In The Name (Rage Against The Machine cover).
– Wes jammed the intro of ‘Fade To Black’ by Metallica before ‘My Way’.
– ‘Eat You Alive’ was not on the setlist, but played during the show, with Fred pulling up a fan on stage to sing the song. Since she couldn’t sing the song, Fred called her a troll and got another fan on stage who sang the song with the band.
– ‘Behind Blue Eyes’ (The Who cover) was not on the setlist either, but added during the show.

Other Notes:
– This was Limp Bizkit’s first show in Canada since 2016, but the first time since 2003 that the band played in Montréal.
– Avenged Sevenfold were supposed to headline this day of the festival, but had to cancel nine days prior due to vocalist M. Shadows suffering from a longer term illness. Following that, the band was added to the lineup shortly after.
– Thanks to Mark for the setlist paper, the final setlist and the detailed show notes. 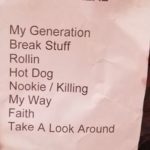 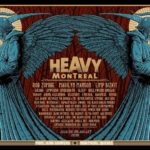 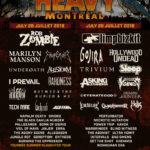 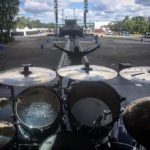 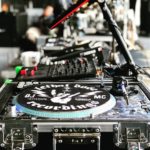 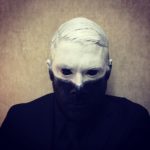