Show Notes:
– ‘Rollin’ (Air Raid Vehicle)’ had an extended intro by Wes and John.
– This was the only time that ‘I’m Broke’ was played this tour.
– Fred brought a fan called ‘Jules’ up on stage during the bridge of ‘Livin’ It Up’ to have him join on vocals until the end of the song.
– Wes, Sam and John jammed the bridge of ‘Master Of Puppets’ by Metallica and the intro of ‘Cowboys From Hell’ by Pantera before ‘Gold Cobra’.
– Wes pulled a fan up on stage to have him play ‘My Way’ on guitar while he did vocals together with Fred.
– ‘Nookie’ was played until the second chorus and went into DJ Lethal’s Medley, consisting of ‘Jump Around’ by House Of Pain, ‘Hip Hop Hooray’ by Naughty By Nature and ‘Insane In The Brain’ by Cypress Hill, all played over the PA.
– After ‘Boiler’, Fred asked the crowd what they wanted to hear. Following that, the band played a Covers Medley consisting of ‘Smells Like Teen Spirit’ by Nirvana until the first chorus, Wes and John jamming the intro of ‘Bombtrack’ by Rage Against The Machine, Wes jamming the intro of ‘Sweeet Child O’ Mine’ by Guns N’ Roses and Wes, Sam and John jamming the intro of ‘Welcome To The Jungle’ by Guns N’ Roses. After that, ‘Killing In The Name’ (Rage Against The Machine cover) was played following a shout from the audience. The song replaced ‘Behind Blue Eyes’ (The Who cover), which was originally on the setlist.
– John thought that ‘Behind Blue Eyes’ (The Who cover) would be played after ‘Killing In The Name’ (Rage Against The Machine) and already went off stage, when Fred and Wes decided to start playing ‘Break Stuff’ suddenly, resulting in John missing the first seconds of the first verse.
– During the intro of ‘Take A Look Around’, Fred praised the crowd and commented “there is nothing better than a german crowd”.
– Wes had a slight issue with his guitar during the second pre-chorus of ‘Take A Look Around’. 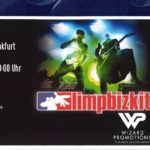 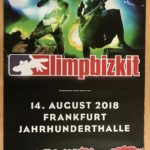 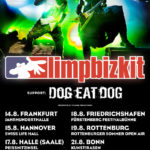 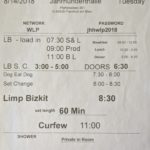