Show Notes:
– Fred talked to the crowd after the first chorus of ‘Full Nelson’ before continuing the song.
– ‘Thieves’ (Ministry cover) was played in it’s short version, but with an extended gap between the two “get the fuck up” parts. Fred went into the crowd during the second half of ‘Thieves’ (Ministry cover) and stayed there until the bridge of ‘Hot Dog’ before walking through the crowd and going back on stage.
– Wes went on his amps during the bridge of ‘Hot Dog’ and played the bridge from there until Fred came back on stage.
– Fred slapped Samuel for fun during the bridge of ‘Hot Dog’.
– ‘Rollin’ (Air Raid Vehicle)’ had an extended intro by Wes and John. The song was also cut before the last chorus, similar to how it was done at the last two shows in Bali and Sterling Heights as well as Aerodrome CZ Festival in June for unknown reasons.
– Shaggy 2 Dope from Insane Clown Posse tried to dropkick Fred during the end of ‘Faith’ (George Michael cover) but failed. He was dragged away by band security and kicked off the event afterwards.
– ‘Eat You Alive’ was supposed to be played after ‘Faith’ (George Michael cover) and Wes even started the song, but Fred told him to stop, possibly due to time constraints.
– ‘Smells Like Teen Spirit’ (Nirvana cover) was played until the first chorus.
– Fred pulled a young fan up on stage after the first chorus of ‘Killing In The Name’ (Rage Against The Machine cover).
– Wes jammed the intro of ‘Counterfeit’ before playing the casual intro for ‘My Way’.
– This was the last show with Samuel G. Mpungu on bass and Franko Carino on backup vocals.

Other Notes:
– Avenged Sevenfold were supposed to headline the festival with Limp Bizkit playing on the co-headline slot, but had to cancel all shows on July 20th due to vocalist M. Shadows suffering from a longer term illness. Limp Bizkit’s slot was upgraded to main headliner of the festival. 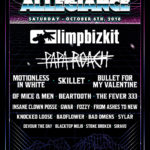 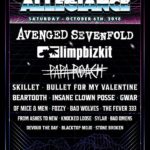 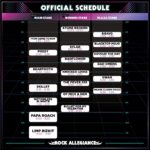