Show Notes:
– Since the band was scheduled to play 30 minutes, the setlist was shortened to the absolute main songs and ‘Thieves’ (Ministry cover) short version opening.
– Wes’ guitar had a malfunction during the second chorus of ‘My Generation’.
– Fred went into the crowd during ‘My Generation’.
– DJ Lethal played the intro of ‘Walk’ by Pantera over the PA after ‘My Generation’.
– Wes didn’t do his usual jam before ‘My Way’ at this show.
– During the bridge of ‘My Way’, Fred sang the lyrics of the second verse (“just one more fight about a lotta things and I will give up everything to be on my own again, free again”) instead of the bridge lyrics.
– Wes went into the pit during the bridge of ‘Break Stuff’.
– Fred pulled a young fan on stage during the bridge of ‘Break Stuff’ and let him be on stage until the intro of ‘Take A Look Around’.

Other Notes:
– The band was booked on very short notice. KROQ’s The Kevin & Bean Show started their own petition to get Limp Bizkit added to the lineup. Through a bit of “social media harassment,” Kevin & Bean launched a #BizkitForWeenie campaign that got through to Fred. On the morning of Friday, May 31st, Kevin & Bean called Fred and put the offer out there to him. After some back and forth talk, Fred decided that Kevin & Bean could call back Monday and hopefully he’d have an answer for them. On Monday, June 03rd, Fred confirmed that the band would perform at the festival, stating “It’s a lot of pressure guys. To throw this together out of the blue, to be ready by Saturday, to get everyone in town. If you guys could provide me with an extra bowl of blue M&M’s we can probably pull this off! Limp Bizkit is about to throw down at the Weenie Roast!”.
– Sold out show.
– This was the third time that the band appeared at KROQ’s Weenie Roast after 1999 and 2000.
– Thanks to Kevin Winter for the additional pictures! 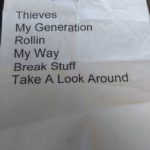 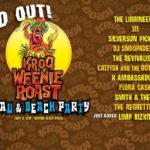 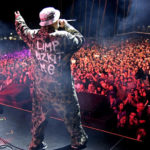 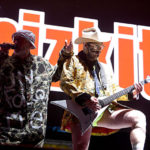 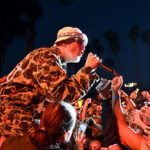 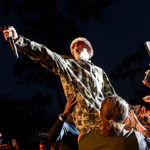 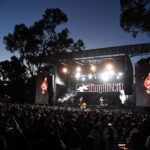 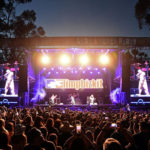 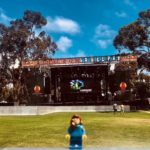