Show Notes:
– The intro of ‘Wasteoid’ was supposed to be played twice only but Wes decided to play the ambient intro again after the second kick in. After the third take, he started ‘Faith’ (George Michael cover). This was the so far last time ever that ‘Wasteoid’ appeared in any form.
– Wes and John jammed the bridge of ‘Master Of Puppets’ by Metallica before Wes started ‘Hot Dog’.
DJ Lethal played the ‘Seven Nation Army’ by The White Stripes remix interlude after ‘Hot Dog’.
– The band played ‘Thieves’ (Ministry cover) in it’s short version to get the crowd moving before ‘Rollin’ (Air Raid Vehicle)’.
– After ‘Rollin’ (Air Raid Vehicle), Wes and John jammed the intro of ‘Master Of Puppets’ by Metallica before going into ‘Wicked’ (Ice Cube cover) with Fred rapping the first lines before stopping.
– Fred walked to the soundboard area during the bridge of ‘My Generation’ and stayed there until the end of the song then walked back to the stage during the intro of ‘Livin’ It Up’.
– During the bridge of ‘Livin’ It Up’ Fred decided to pick fan Dave up on stage to join him on vocals until the end of the song.
– DJ Lethal played the ‘Jump Around’ by House Of Pain interlude after ‘Livin’ It Up’.
– ‘Re-Arranged’ was played in it’s shorter version until the end of the bridge and went straight into ‘Eat You Alive’. This was the last time so far that these two songs transitioned into each other.
– Wes jammed the intro of ‘The One’ before ‘Nookie’. While that, Fred made a shoutout to hardcore fan Aldis in the first row, asking him if his T-Shirt (saying “this is my bachelor party” in the front and “I ♡ Limp Bizkit and my soon to be wife” in the back) really meant that this show was his bachelor party. The song was played until the second chorus and went into ‘Full Nelson’, which was played again after being absent for a handful shows on this tour. Fred then decided to pick Aldis up on stage and asked him if he speaks German. It turns out he is from Latvia, DJ Lethal’s home country. Wes stopped playing the intro of the song and suggested that they kiss. After they did share kisses on the cheek, Wes suggested that he kisses someone else on the lips, making Fred and Wes bring out Kadaver and they kissed while DJ Lethal played ‘I Know What Boys Like’ by The Waitresses over the PA. After they did that, Wes also kissed him on the lips before re-starting ‘Full Nelson’. Then the song was played with Aldis joining Fred on vocals.
– After ‘Full Nelson’ DJ Lethal played ‘An Occasional Man’ by Gloria DeHaven (Don Tiki version) over the PA while Wes sang over it.
– ‘Behind Blue Eyes’ (The Who cover) was played until the second chorus.
– Wes went into the pit for ‘Break Stuff’ and made his way back on stage when the song kicked back in from the bridge.
– Soundcheck of this show included ‘Wasteoid’ Intro multiple times into the intro of ‘Why Try’, ‘My Way’, ‘It’ll Be OK’, ‘Just Like This’ Intro, ‘Nookie’ beats into ‘Full Nelson’, ‘Boiler’ E-Bow Intro and ‘Wanted Dead Or Alive’ (Bon Jovi cover) six times.

Other Notes:
– Former touring bass player Samuel G. Mpungu was in attendance at this show.
– This was the first time since 2001 that the band played in Bremen.
– Attendance of this show was 3500 people.
– No opening band was booked for the German dates. The band ended up starting at 8:30 pm. 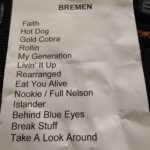 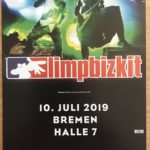 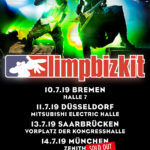 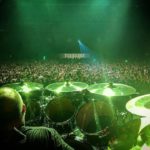 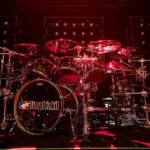