Show Notes:
– ‘Thieves’ (Ministry cover) was not on the setlist but played in it’s short version to get the crowd going.
– Part of the front barricade broke during ‘My Generation’, causing in the bridge of the song getting more extended than usual with Fred and Wes talking to the crowd, aiming them to help out people who got hurt while the barricade got fixed. Reports later claimed that 15 people suffered minor injuries.
– DJ Lethal played ‘A Lesson Learned’ after ‘Livin’ It Up’, ‘Seven Nation Army’ by The White Stripes remix and ‘Walk’ by Pantera interludes over the PA after ‘Rollin’ (Air Raid Vehicle)’ and the ‘Everyday’ Interlude after ‘Full Nelson’.
– ‘Nookie’ was played until the second chorus and went into ‘Full Nelson’, for which Fred got a fan on stage to join him on vocals.
– Fred did a short “if you’re happy and you know clap your hands” sing-along before ‘Re-Arranged’ and after ‘Behind Blue Eyes’ (The Who cover).
– John Connor and Daniel Mallmann of Dog Eat Dog joined the band for ‘Killing In The Name’ (Rage Against The Machine cover). John’s microphone didn’t work at the beginning of the first verse.
– Wes played the riff of ‘Master Of Puppets’ by Metallica before starting ‘Break Stuff’.
– After ‘Break Stuff’ DJ Lethal played ‘An Occasional Man’ by Gloria DeHaven (Don Tiki version) over the PA with Wes singing over it.
– ‘Behind Blue Eyes’ (The Who cover) was played until the second chorus.
– The Covers Medley was ‘Brain Stew’ by Green Day until the first chorus followed by the intro of ‘Welcome To The Jungle’ by Guns N’ Roses. After that, Wes started ‘Heart-Shaped Box’ by Nirvana. Since Michael Starr (vocalist of Steel Panther) was watching the show from sidestage, Fred got him on stage to have him sing the song. After a bit of hesitation, he did that song and the following song ‘Smells Like Teen Spirit’ by Nirvana with the band. Wes jammed the intro of ‘Sweet Child O’ Mine’ by Guns N’ Roses after that before ‘Take A Look Around’.

Other Notes:
– Attendance was 5000 people.
– Despite being scheduled to play 60 minutes, the band played a festival headline set.
– Members of Steel Panther, Skindred and Dog Eat Dog watched the show from sidestage.
– Fred watched parts of Steel Panther’s set. 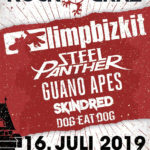 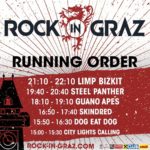 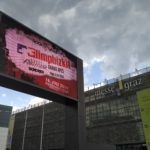 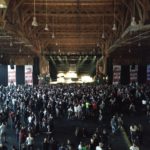 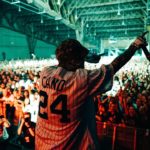 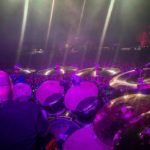 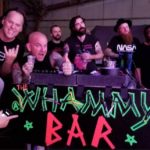