Show Notes:
– This was a special charity christmas headline show the band played for the House of Ruth, a non-profit organization taking care of homeless families. Therefore the band (except for John) wore christmas costumes for the show and played ‘Jingle Bells’ (James Lord Pierpont cover) in a metal version three times. This was the first time ever that the band covered the song. The song was supposed to be performed four times, with the second performance due after ‘Rollin’ (Air Raid Vehicle)’ but was dropped during the show.
– Fred messed up a couple lines in the second verse of ‘Nobody Loves Me’. DJ Lethal also accidently played the sample of ‘N 2 Gether Now’ right when the bridge came in. This was the so far last time that ‘Nobody Loves Me’ and ‘9 Teen 90 Nine’ were played.
– This was the first time since 2017.04.02 Las Vegas that ‘N 2 Gether Now’ was played. The song was played until the first chorus with Fred rapping Method Man’s lines of the first verse.
– This was the first and only time that both ‘N 2 Gether Now’ and ‘It’ll Be OK’ were played live in 2019.
– DJ Lethal played ‘Feliz Navidad’ by José Feliciano over the PA after ‘9 Teen 90 Nine’.
– Wes and John jammed the first seconds of the intro of ‘Welcome To The Jungle’ by Guns ‘n’ Roses before ‘Rollin’ (Air Raid Vehicle)’.
– DJ Lethal played ‘Christmas in Hollis’ by Run DMC over the PA after ‘Rollin’ (Air Raid Vehicle)’. After that, Wes jammed the intro of ‘Sweet Child ‘O Mine’ by Guns ‘n’ Roses in a slower tempo while Fred went to the VIP section. Then, Wes and John jammed the intros of ‘South Of Heaven’ by Slayer and ‘Pollution’ before ‘My Generation’ was played.
– Fred performed ‘My Generation’ from the VIP section.
– After starting the song as usual after ‘My Genertaion’, Wes changed his guitar before continuing ‘Livin’ It Up’.
– Fred called out the alternative music press’ bad work during the intro of ‘Livin’ It Up’.
– Fred pulled up local band Dirty Machine vocalist David on stage for ‘Full Nelson’.
– ‘Brain Stew’ (Green Day cover) was mashed up with ‘Counterfeit’ and ‘Pollution’ with Fred rapping the first verses of both songs over the verse instrumental. After that, the band played the original song until the first chorus. Wes played the song with a custom made Jackson Surfcaster with light up kill switch guitar. This was the first time since 2009 that Wes played around with a killswitch during a Limp Bizkit live show.
– ‘My Way’ didn’t have the extended intro at this show. A fan crowdsurfed to the stage during the song too.
– Pauly Shore joined Fred for the second performance of ‘Jingle Bells’ (James Lord Pierpont cover).
– During the intro of ‘Re-Arranged’, Fred made a shoutout to the people in attendance that he had a beef with at the time, mainly mentioning Andrew Burkle. He passed away on 6th January, 2020. Fred and Sam played at his memorial just a month later.
– ‘Re-Arranged’ was played in a different version. John played with half beat during the verses and the ending was a stripped down version with Wes playing his parts clean instead of distorted and John also not coming back in until the very end. This was the only time ever that this different version was played.
– After ‘Re-Arranged’, Fred sang the first lines of ‘Lady’ by Styx before DJ Lethal played ‘Last Christmas’ by Wham! over the PA.
– Instead of playing the last part of ‘I’m Broke’, the band covered the chorus of ‘This Love’ by Pantera. This was the first time since 2015.11.23 Kazan, Russia that any portion of this song was played. After that, the band played ‘Mouth For War’ by Pantera until the first chorus for the first time since the Costa Mesa earlier this year.
– The band invited three dancers to perform on stage after ‘Mouth For War’ (Pantera cover) while ‘Perm’ by Bruno Mars and ‘I’ll Be’ by Foxy Brown (feat. Jay-Z) were played over the PA. After that, another dancer joined them on stage, imitating Michael Jackson while ‘Billie Jean’ and ‘Smooth Criminal’ by Michael Jackson were played over the PA.
– This was the first time ever that the band covered ‘Wanted Dead Or Alive’ by Bon Jovi. The song was soundchecked a few times on the last European Tour but never played there. Before the song, Fred made a speech about the House Of Ruth and thanked everyone for coming.
– ‘It’ll Be OK’ wasn’t on the setlist but played after Fred got a request for the song. The song was played until the first chorus and transmitted straight into ‘Break Stuff’.
– Machine Gun Kelly joined the band on vocals for ‘Break Stuff’. Bones also made an on stage appearance from the bridge onwards for the rest of the song.
– Jacob, a saxophonist, joined the band for ‘Take A Look Around’ to play the strings during the verses. Fred went into the crowd for the bridge and the final part of the song.
– To finish the show, the band played ‘Jingle Bells’ (James Lord Pierpont cover) for the third time.
– Wes played this show with a swollen rotator cuff.

Other Notes:
– This show was announced on November 27th. Admission was 20$ and tickets sold out within two minutes after going on sale. Roughly 500 people were in attendance.
– This was the first time since 1998 that the band played at this venue.
– 100 shirts were made for this show and sold out quickly during the night for 30$ a piece. You can check it out below.
– An opening artist called “Obey” was staged one hour before the band took the stage to gap the waiting time.
– Some VIPs and musicians were in attendance, including: Machine Gun Kelly, Pauly Shore, Linda Ramone, Andrew Burkle, Tom Green, Bones and Tsuzumi Okai. 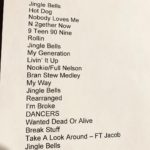 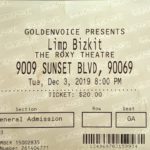 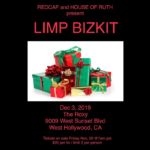 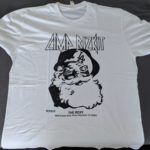