Show Notes:
– This was the first time since 2015.06.01 Leipzig, Germany that the band opened a show with ‘Break Stuff’.
– After ‘Livin’ It Up’ DJ Lethal played a medley of ‘Fight For Your Right’ by Beastie Boys, ‘Party Up’ by DMX, ‘Insane In The Brain’ by Cypress Hill and ‘Walk’ by Pantera.
– From this show onwards, ‘Rollin’ (Air Raid Vehcle)’ was played without the last chorus for the remainder of 2021.
– DJ Lethal played ‘Hip Hop Hooray’ by Naughty by Nature and ‘Jump Around’ by House Of Pain over the PA after ‘Rollin’ (Air Raid Vehicle) and ‘A Lesson Learned’ and the Benny Hill theme over the PA before ‘Full Nelson’.
– Fred picked up a fan called Jaxton on stage to join him on vocals for ‘Full Nelson’.
– ‘Faith’ (George Michael cover) was on the setlist after ‘Full Nelson’ but not played during the show.
– ‘Behind Blue Eyes’ (The Who cover) was stopped during the start of the last chorus.
– Fred dedicated ‘Boiler’ to a few people in the audience who requested the song to be played before the show.

Other Notes:
– The band was supposed to headline this festival in 2020 which was cancelled due to the Covid-19 pandemic starting. This was the second time that the band headlined the festival after 2010.
– The band headlined night 2 of 3.
– Due to the ongoing pandemic, the lineup of this festival saw several changes. Snoop Dogg was supposed to co-headline with the band but ended up being replaced by Corey Taylor. Check out all the lineup changes in the latter pictures below. 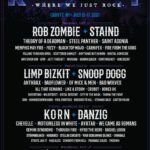 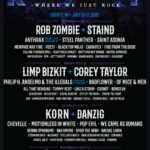 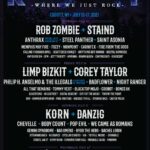 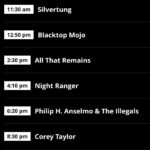