Show Notes:
– This was the first time since 2013.08.18 Shanghai, China that the band opened a show with ‘Thieves’ (Ministry cover) in it’s short version followed by ‘Show Me What You Got’. The intro of ‘Show Me What You Got’ was shorter than usual with Brandon kicking in almost immediately upon order by Fred.
– ‘Rollin’ (Air Raid Vehcle)’ was played without the last chorus.
– To comply with his “dad vibes” stage persona, Fred skipped a few screams at the show, most notably during the chorus of ‘Hot Dog’ and the bridges of ‘Break Stuff’ and ‘Nookie’.
– DJ Lethal played following interludes over the PA: ‘Party Up (Up In Here’) by DMX and ‘Insane In The Brain’ by Cypress Hill after ‘Break Stuff’, ‘Hip Hop Hooray’ by Naughty by Nature and ‘Walk’ by Pantera after ‘Livin’ It Up’ and ‘Jump Around’ by House Of Pain and ‘Just a Friend’ by Biz Markie after ‘Nookie’.
– Fred made a shoutout to Slipknot before ‘Gold Cobra’, causing the crowd to shout their tribute to Joey Jordison with Fred joining in.
– Mike Vallely, vocalist of Mike Vallely and The Complete Disaster and pro skateboarder, joined the band on vocals for ‘Full Nelson’. Fred accidently rapped the lyrics of verse 2 during the middle of verse 1.
– Fred didn’t scream the end of ‘Boiler’.
– After ‘Boiler’ Wes played a solo with his electronic drum machine setup for the first time ever at a Limp Bizkit show. It remains unknown which songs he played.
– ‘Behind Blue Eyes’ (The Who cover) was played until the second chorus.
– The band played the Nirvana Medley including ‘Heart-Shaped Box’ and ‘Smells Like Teen Spirit’ until the first chorus. After that Wes jammed the intro of ‘Sweet Child ‘O Mine’ by Guns n’ Roses briefly before he started ‘Take A Look Around’.
– During ‘Take A Look Around’ Fred let the crowd rap a few lines of verse two.

Other Notes:
– Mike Vallely and The Complete Disaster was added as local support.
– Since Brandon Pertzborn is from the area, his family was in attendance.
– Sid Wilson from Slipknot was in attendance.
– This was the first time since 1997 that the band played in the state of Iowa. The band was supposed to play there in 1999 but the show ended up getting cancelled.
– Thanks to Instagram user “kyle.jaay” and the venue for the additional photos. 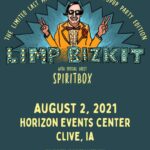 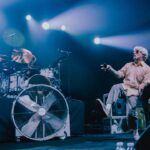 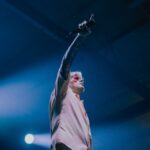 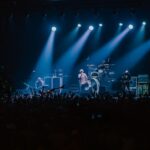 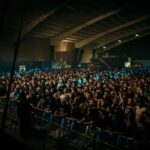 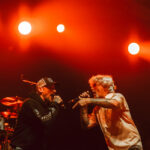 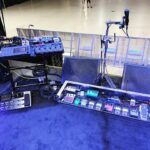