Show Notes:
– This was the first time ever that ‘Take A Look Around’ opened a Limp Bizkit headline show.
– Wes and Brandon jammed the intros of ‘Welcome To The Jungle’ and ‘Sweet Child O’ Mine’ by Guns n’ Roses before ‘Rollin’ (Air Raid Vehicle)’.
– ‘Rollin’ (Air Raid Vehcle)’ was played without the last chorus.
– Wes called out somebody in the audience for bullying after ‘Rollin’ (Air Raid Vehicle)’.
– To comply with his “dad vibes” stage persona, Fred skipped a few screams at the show, most notably during the second chorus of ‘Hot Dog’ and
– DJ Lethal played two medleys with following interludes over the PA: ‘Party Up (Up In Here’) by DMX, ‘Insane In The Brain’ by Cypress Hill and ‘Walk’ by Pantera after ‘Livin’ It Up’ and Jump Around’ by House Of Pain and ‘Just a Friend’ by Biz Markie after ‘Nookie’.
– Fred picked up a fan called Chanel on stage to join him on vocals for ‘Full Nelson’. While that, DJ Lethal played the “The Price is Right” theme over the PA.
– ‘Re-Arranged’ was performed for the only time in 2021. The song started with Sam playing the bass line straight and Fred didn’t scream the last lines of the song but instead sang them.
– Wes played a solo with his electronic drum machine setup after ‘Re-Arranged’.
– After ‘Boiler’, Fred asked for song requests, causing Wes to start playing the intro of ‘Counterfeit’. Fred shut it off by saying “there’s only six people in here who know that song”. After that Fred sang the intro of ‘You Give Love A Bad Name’ by Bon Jovi for fun. After that, Wes and Brandon jammed the intro of ‘Master Of Puppets’ by Metallica before the ‘Nirvana Medley’.
– The band played the Nirvana Medley including ‘Heart-Shaped Box’ and ‘Smells Like Teen Spirit’ until the first chorus. After that Wes jammed the intro of ‘South Of Heaven’ by Slayer briefly.
– During ‘My Way’ Fred accidentally sang the lines of verse two during the end of verse one.
– Fred let the crowd choose the final song, giving them the choice between ‘Behind Blue Eyes’ (The Who cover) and ‘Break Stuff’. The crowd clearly wanted ‘Break Stuff’ so the band played it.
– DJ Lethal played ‘Turn It Up, Bitch’ over the PA as show outro. Fred announced that that track was number four of the new album, later revealed to be “Still Sucks” and then threw some t-shirts in the audience while the song played. 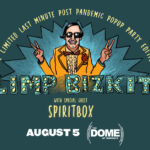 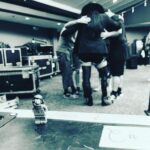