– This show was billed as part of the “Lincoln on the streets” concert series.
– Though Limp Bizkit has played in Omaha, Nebraska several times over the years (the last taking place in 2013), this would have been Limp Bizkit’s first show in Lincoln. 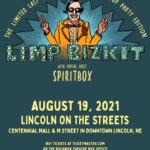