– Tickets for this show were sold out. 2000 people were supposed to see this show.
– This would have been the band’s first show in Austin since 1999. 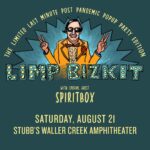