Other Notes:
– Following the cancelled US tour in August, all US fall festival shows were cancelled as well. The public announcements by the festivals came on August 25th.
– Limp Bizkit were supposed to headline the warm up day of the festival. Faith No More were supposed to replace the band but ended up cancelling themselves. Cypress Hill were finally booked on the Thursday night headline slot. See the final day schedule below.
– This would have been the second time that the band played at Aftershock after they played there in 2014 already. 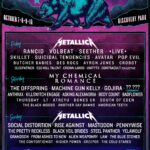 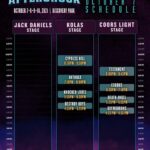