Ho ho ho! Team BizkitLive wishes you a merry christmas! We got some info regarding the 2023 tours that might interest you so this post will be a very long one. Disclaimer: We don’t have a source inside as of writing this but can confirm some of the numbers and info mentioned below.

Ticket sales are going excellent! These seven of ten total headline shows are sold out:

München and Stuttgart are also looking very good with tickets running low for both (München venue has a capacity of 5800 and the venue in Stuttgart has a capacity of 7000 in the pit). Prague (capacity of 3000) still has tickets available and Paaspop still has day tickets available for the day where Limp Bizkit plays.
These numbers probably give a better explanation why the band will tour Europe twice within three months but more about that in the following part.

— Further predictions by us for Limp Bizkit tours 2023 —

We got quite a few for you – please take them with a grain of salt:

First: South America! Over the course of 2022 more and more rumors of the band touring South America again floated around.
Rumored to take place in January then pushed to early 2023, we can tell you that as of writing this there are still negotiations to go through which means we may have to wait for that tour to happen for some more, yet.

Second: USA! With the band scheduled to play two festivals in May and August we assume that there will be another US tour eventually in 2023. Wes confirmed in an interview months ago that the band had planned a second US tour leg for the end of 2022 but it didn’t happen. How the tour could look like and when precisely it will take place? We have no clue as of now.

Third: Australia / New Zealand / Japan / more in Asia! Given that the band won’t appear at the Knotfest Festivals (Australia & Japan) in March and April we assume that if they return it will be on another occasion and only if the demand is guaranteed.

Fourth: Europe Part 2! Now that was a nice surprise on Tuesday, was it not? The band returning to Rock Am Ring and Rock Im Park for the first time in ten years surely is something we didn’t expect. Given the ticket sales for the rescheduled dates look very good we assume that we will see a good amount of extra shows for June announced in early 2023.

Here are our thoughts about what could be and what not:

Germany: Since all five confirmed shows of both tours so far are only in the southern part of the country and since the Hannover show (originally planned for 2022) has been cancelled we expect that Limp Bizkit will add at least two headline shows in the northern part of Germany – Berlin and Hamburg to be precise. Given that demand for more shows in Germany were one the main reasons that the band toured Europe twice in 2015 and 2018 we assume that there will be even more headline shows in the country.

As for certain other European countries, here is what is known and what not:

– UK: there were some (very unusual) rumors about the band playing at the famous Glastonbury Festival in England but it just doesn’t seem likely; Download Festival in Donington, England may also be out of the books as they got most of their lineup together
– France: the headline show in Paris (scheduled for 2022) has been officially cancelled too and Hellfest was rumored for some time but only the opening festival slot is available now so it’s very unlikely that the band will play there
– Spain: still 0 info about the Madrid show, perhaps it will be rescheduled for June, but no confirmation so far
– Belgium: Graspop may be possible and was rumored some time ago, but so far no confirmation
– Netherlands: given that the Tilburg show is sold out, another headline show in Amsterdam’s AFAS Live and/or an appearance at Pinkpop Festival may be possible, but no confirmation so far
– Luxembourg: perhaps another headline show at the Rockhal, but no confirmation so far
– Finland, Sweden, Denmark, Poland, Switzerland and Portugal: the appearances at festivals they were supposed to play at in 2022 are cancelled since the band won’t tour Europe in August
– Austria: Nova Rock already confirmed all it’s headliners so it’s very unlikely that the band will play there
– Switzerland: Greenfield Festival also confirmed all it’s headliners as well but it seems that there is one vacant spot on the co-headliners spot – a headline show in Zürich may be in the cards´in case they don’t play at Greenfield
– Italy: we hear you Italians request the band to come back to your country all the time – no signs so far though..

We will have the 2022 show pages live until the first European Tour of 2023. See you all next year for plenty of Limp Bizkit live coverage! 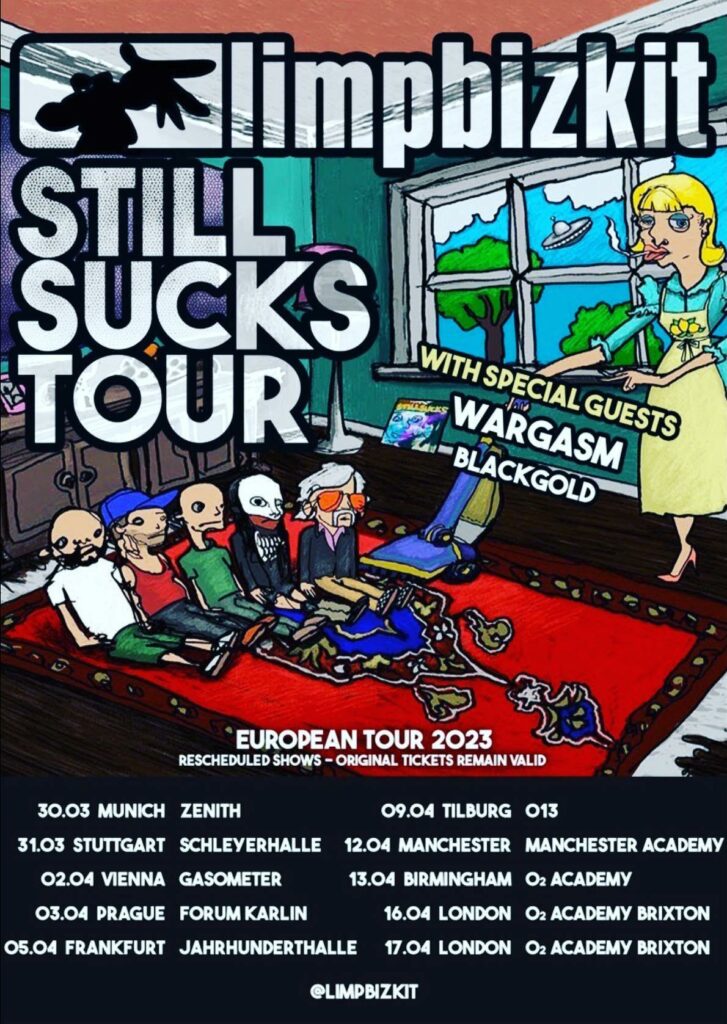