Show Notes:
– Fieldy came out and jammed the Intro of ‘Stuck’ before Sam came out and took over.
– The band joined KoRn for ‘All In The Family’ which closed the night.

Other Notes:
– This setlist is unconfirmed, but we are sure they played the same set. A review of the show said:
” LB tore it up. Plain and simple. Fred was in top form, Wes was in a bunny costume, and everyone else was just tearing stuff up. The set was the crashed UFO set just as with every other FV show, and when Fred came out of that mist, everybody BLEW UP. My only complaint about LB was that their set was pretty short, but they had some awesome breakdancers out there and it was just cool. They opened with ‘Pollution’ and went on to play songs like ‘Counterfeit,’ ‘Nobody Loves Me,’ ‘Faith,’ House of Pain’s ‘Jump Around,’ and what sounded like two new songs.. but maybe they were just jams. They also played ‘Stuck,’ and it was awesome.. you heard the opening bassline, and then the light when on the bassist, but it was actually Fieldy. Then the LB bassist (forgot his name) came out and took his bass back. It was pretty damn cool. They worked it, though.. LB got everybody into it, and in my opinion they should have been in Rammstein’s place.” It seems unlikely that the band swapped ‘Cambodia’ and ‘Pollution’ mid tour, given the fact that all Family Values shows we know of started with ‘Cambodia’. 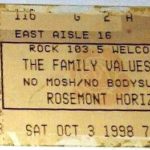